The sale opens from 10am at the Prairewood Youth Centre hall.  Sellers MUST be an FSA member of one of the FSA branch or affiliate clubs.  Much more than a bird sale.  There will be various displays, trade tables, FSA sales table and draw of our major raffle at midday.  Don't miss this event. 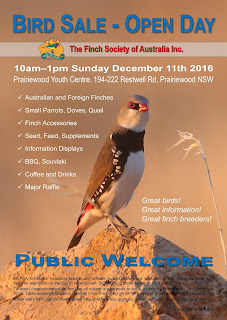 Posted by Bob at 10:24 PM No comments:
Email ThisBlogThis!Share to TwitterShare to FacebookShare to Pinterest

Synopsis of meeting with office of Jaala Pulford to resolve restrictions of sale at bird shows, sales and auctions throughout Victoria

Discussion emphasised the lack of welfare issues at the frequent bird shows, sales and auctions held throughout Victoria and nationally for well over 100 years. It was agreed by all present that welfare of birds in our charge is paramount and that The Prevention of Cruelty to Animals Act 1986 is the legislative tool regulating captive bird welfare in Victoria. We presented facts highlighting the fallacy that the contentious Section 96 of the Domestic Animals Act 1994 in any way protects the welfare of birds. Furthermore, lack of evidence to the contrary makes it clear Section 96 was enacted in ignorance of frequent bird shows, sales and auctions.

An undertaking was received from the Chief of Staff that Minister Pulford would respond within weeks to our recommendations to exempt “caged birds” from Section 96. Please note there is no guarantee the response will be in our favour.

The Chief of Staff will report back regarding the possibility of appointing an avian representative to the recently formed Victorian Animal Welfare Advisory Committee (AWAC).

The Chief of Staff reaffirmed the Minister's previous undertaking to review Section 96 of the Domestic Animals Act 1994. This will occur in conjunction with other unrelated amendments to the Act which are currently being considered. At this time there is no consultation planned and no timeline for this undertaking hence the urgent need to exempt “caged birds” in the interim.

Thanks to the Minister’s office, in particular Chief of Staff Megan Berry, for Thursday’s meeting. We look forward to ongoing consultation as we work together to resolve the issue.

My appreciation to all who have contributed to the paper and for the many words of support and encouragement. See you at a sale soon!

Sydney Showgrounds is the venue for this major promotion of aviculture. Aviary birds have a dedicated pavilion adjoining all the action. The FSA will be there in force with a range of promotional displays, plus our sale table.

Read more at  http://www.rasnsw.com.au/National-Poultry-Show-2616.htm
Posted by Bob at 10:45 PM No comments:
Email ThisBlogThis!Share to TwitterShare to FacebookShare to Pinterest

The Red Siskin is critically endangered in the wild and this initiative aims to determine the reasons and identify a way forward. This will include captive breeding to enable close observation of the species by researchers. At this stage it is unclear if a release program will be appropriate. The FSA is now involved in this program. The research facility will be built in Venezuela. The architect for this facility will be in Australia early February to consult with Mike Fidler over the STGF facility. Later in February the head keeper responsible for the centre once operational will head to Australia. They are particularly interested to learn how we breed Red Siskins in planted aviaries. This is rarely done in other countries. The head keeper will stay with me for a few days so we can tour around various successful Red Siskin aviaries and likely visit other captive breeding programs, namely Orange Bellied Parrot (PRIAM) and Regent Honeyeater (Taronga).